In May 2011, major central banks remained mostly on hold. Only Russia and India hiked their interest rate. 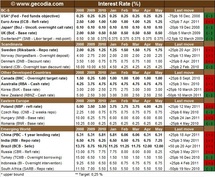 Over the past few months, the emerging central banks are more hawkish and tighten significantly their monetary policy, a logical move in a context of robust growth and high inflation. May was the first month of

For the G-4 (Fed, BCE, BoJ and BoE), excluding the ECB, the consensus remain in favour to a still very accommodative monetary policy, with close to zero interest and quantitative easing. The ECB is tough on inflationary risks and clearly has already hiked the refi rate (+0.25bp to 1.25%).

The tone of the various speeches given by ECB official’s remains hawkish, the reality is more complex and the path of the tightening cycle is likely to be very data-dependent and gradual. For the Fed, the QE2 will end in June and the US central bank is expected to adopt wait-and-see attitude during the summer. In the UK, the inflation is above 4%, challenging the BoE mandate (upper bound for inflation: 3%), but The Bank considers that this will be temporary. Overall, the most prominent CB are very cautious and rates will stay close to their lowest level in history for some time.

Over the last months, Emerging central banks tighten aggressively their interest rate in order to control inflation and cool down their economies. The stance for monetary policy will be gradually moving to a more neutral bias. The first signs of economic slowdown materialize and inflation will peak during the summer.